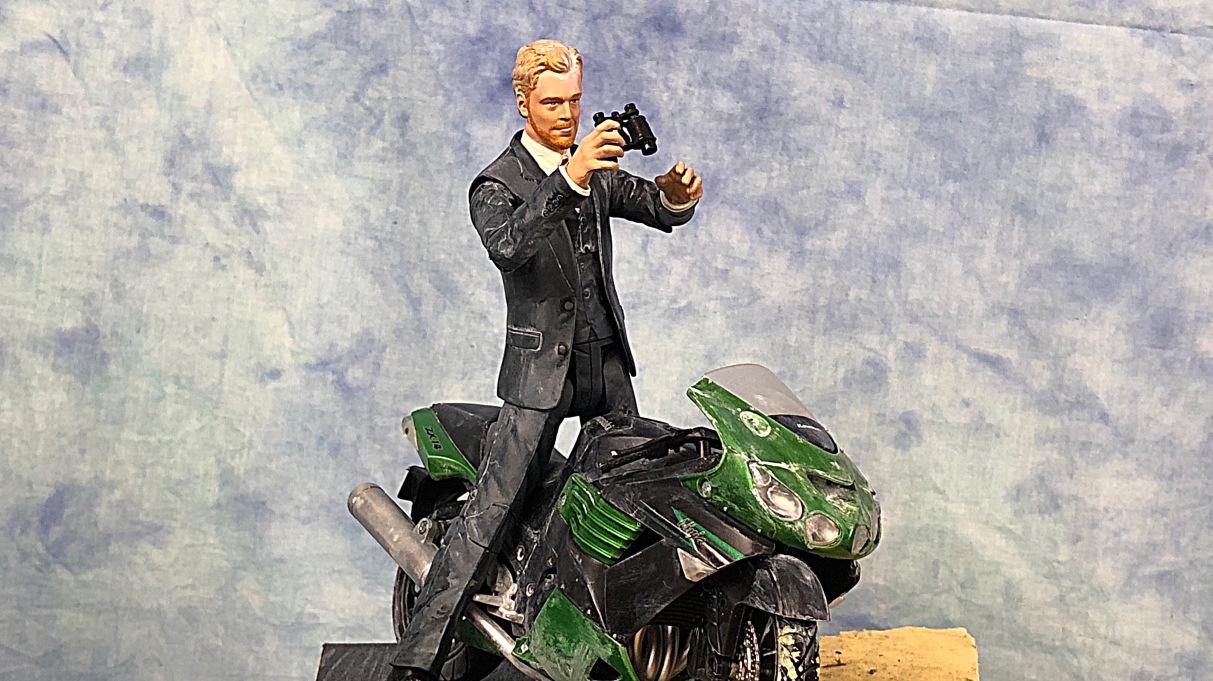 The 1/12 Scale Man With the Binoculars in Witness

We first ask you to scroll to the bottom of this page and click on the YouTube containing the music from the movie Close Encounters of a Third Kind. Then, scroll back up and press our Vimeo above. We are not allowed to upload the copyrighted music in our live diorama video so have to go through all of this.

The Witness diorama is finally complete (and still the damned N-scale Victorian windows for the flat in the Chasing Bullitt diorama have not arrived so that project continues on hold). As noted in our previous post Witness, this diorama is really an experiment in forced perspective using four different scales. However, the above video shows the tech part of the diorama with an Amir LED strip inside the alien ship controlled by a remote controller. (All for the ridiculous total of about $7!) Inside the ship is also an Anker Bluetooth speaker playing Isao Tamita’s “Close Encounters of the Third Kind.” It is the music when us humans were trying to communicate with the aliens.

As I noted in the previous post, the scales would be on various levels and I thought about how I would create these levels. Eventually, it seemed the best way to do this was by creating tubular stands holding the different levels. So, this is what I did. In the below photo, the 1/12 scale motorcycle man (with a snake and turtle by him) holed up binoculars spying on the 1/87 scale man on the level below him. This 1/87 scale man looks down on a roadblock below him in N-scale 1/160 and below that the alien craft with two tanks in Z-scale.

Side view of the Witness Diorama

While the side view of the diorama shows the various levels, it is meant to be viewed from behind the large 1/12 scale man with the binoculars as in the below photo.

Viewer’s Perspective of the Witness Diorama

The various layers of the diorama have their own drama going on.

The Man on the Dirt Bike 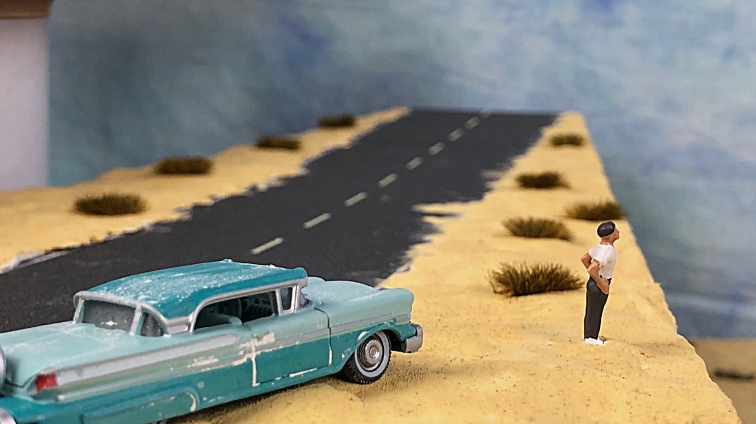 The Witness to the Events Below

The Roadblock and the Government Cars 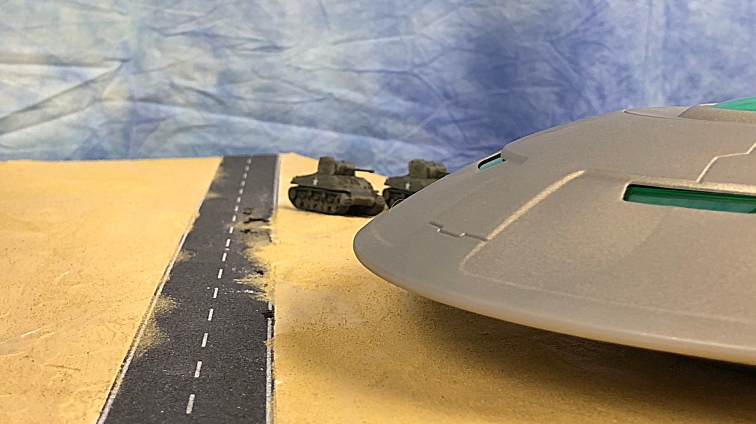 The Tanks and the Alien Spaceship

So, this diorama is finished. For now, that is. I’m somewhat unhappy with the way the Plaster of Paris took to the foamcoare board. The foamcore is not meant for water and I mixed the plaster with a good amount of water, especially in the lower levels because I wanted to flatten out the bumps of the desert because, seen from far away, the desert looks smooth. The result is that the bottom two layers of the diorama have brittle, egg-shell outer skin to them that breaks if you simply look at it. It is nothing like that solid piece of wood that went to make the Deep State Swamp diorama.

I pour Mod Podge glue/filler onto the constant cracks in the eggsheel thin desert paint (AK Terrain’s Desert Sand imported from Spain). I wait for the Mod Podge to dry and then repaint with the Desert Sand paint but cracks continue to appear in the thin crusty plaster shell which has risen from the foamcore board in some type of protest of all the water being applied to the board. When I drilled a hole in the foamcore for the wires of the LED lights inside the spaceship to go to the charger below, there developed a whole new group of cracks in the desert around the Paragon model 8″ in diameter alien craft. To change this to scale we need to translate 8″ to Z scale since the craft occupies this level of the diorama.

Each of the Z scale tanks are approximately 20′ long in reality and about 1 1/2″ in their Z-scale model length. They look like old Sherman tanks to me. Fat and compact. I measure about seven of them goes across the diameter of the alien craft so it is around 140 scale feel in diameter. This is definitely a much greater scale than the model creators saw the craft being modeled as. According to the picture on the model box with the craft and a person next to it, the model is meant to be something in O-scale or 1/48 scale rather than Z-scale’s 1/220. Yet the change seems to make sense. (Especially since a large craft was needed by the artist to store the LED flashing lights installed inside it.)

Yet, what chance do the two little tanks have against a craft 140-feet-in-diameter? There is much flashing lights and a type of music emitted from the craft. Perhaps some attempt at communication? The attempt at communication is really the theme music from Close Encounters by Isoa Tamita. In the end, the reality of the matter is that the tanks are placed on the “ground floor” of the diorma not to stop the alien space ship but rather to show its size. But showing this size, it is obvious that the smaller tanks would have a difficult time stopping the alien spacecraft.

Interestingly, in the Witness diorama, there is no apparent receivor of communications from the alien craft. The film Close Encounters has recievors of alien communication in spades. They are on the runway in the film and in the office/labs behind the runway. In contrast, the Witness diorama scene presents much more of a lonely scene. The original referral to the famous Close Encounters film is tested in the Witness diorama viewer. Ultimately, it is rejected. It is impossible to reconcile a scene with only two people with a scene filled with hundreds of people. Hard to reconcile people who were present at the ground floor of the event and those who were not present but rather “witnesses” to thiis present happening for others. Below them. Contained within a particular context they two witnesses were able to see.

Only two people are viewed in the diorama: the man with the binoculars, observing a man witnessing the events below. Why is the man being observed? And what, if any, is the result of this observation? Who is this man anyway? Perhaps all of us in some sense?

Perhaps, I should add a number of Z-scale people to the bottom level scene? I just received a bag of Z scale people so they could be placed around the alien craft – like in the famous Speilberg movie. I decided to let it stand for now and settle for what I had, as brittle as it was: an alien ship attempting a strange music-related communication (via the bluetooth speaker inside the diorama) and lighting (via an LED lighting strip inside the alien craft.) Place the Z-scale people around the two tanks – currently, the only objects that occupy the “ground floor” with the alien space craft.

Yet, even if the little Z-scale people could be added to the diorama, is it really about them anyway? Or, is it really about the two observers in the current Witness diorama? Both of them are observers of the events below them in the four-layer world of Witness. The two observers from above are not involved in the music and lights coming from being close to the spacecraft. They are not like all the people in front of the great craft in Close Encounters of a Third Kind. Both of the two are witnesses to the events below. Not part of the events. If they were part of the events they could not be a witness to them. 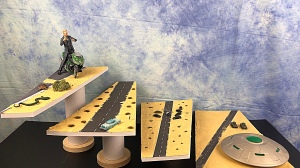 In the end, the diorama achieves much of what I envisioned it achieving. Yet I wondered if there was more to be achieved? More gold to be mined from this particular scene?

But I’m upset that the “desert sand” on the lower levels is eggshell brittle. This is the last time I put Plaster of Paris on foamcore board. Its fragile construction makes it hard for me to take it seriously. After all, the lightest touch of a finger on some of the desert sand has the effect of a great earthquake like crack in the surface.

Maybe it deserves to be cracked up and started over? It’s so different from the “door stop” solidness of the Deep State Swamp diorama. Perhaps this diorama is meant to offer a prototype for another diorama? What is the lesson to be learned, the takeaway? Not mixing plaster, water and foamcoare board together is one lesson learned as well as perhaps getting away from creating foam, paper and glue projects.

Anyway, it’s good to get Witness behind me and get back to focusing on the more solid Chasing Bullitt. (That is, focusing on it if the N-scale Victorian windows for the diorama flat ever arrive!)

One thought on “Final Witness”