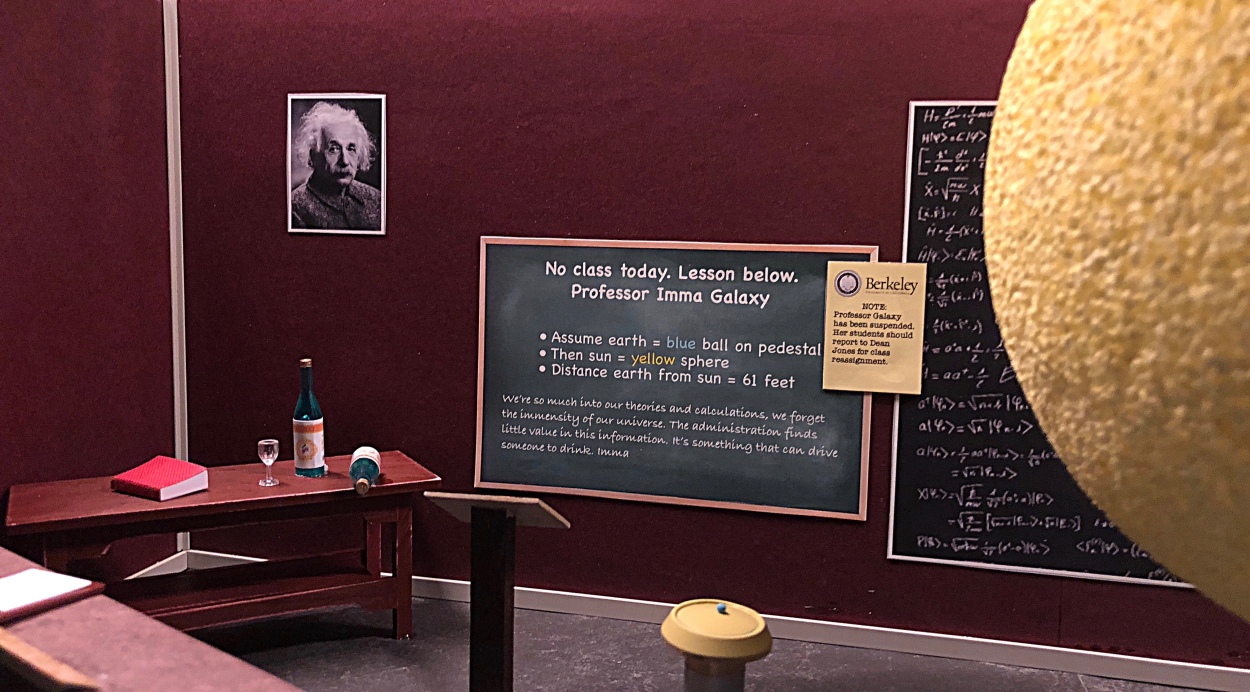 Here, more of an intellectual exercise that requires participation of the viewer. In effect, the viewer becomes the absent students in the diorama. The viewer/student is given four pieces of a question/puzzle being exposed.

The first piece of the puzzle is the large blackboard on the right full of math calculations and formulas. This blackboard symbolizes the math basics of astronomy or what this class is supposed to be all about. The second piece of the puzzle is the green-board with the most recent post of the absent professor to her students about the latest class assignment. It is a lesson in scale more than anything else that attempts to get the students excited about the immensity of the universe at a time when no one looks up at the heavens anymore but rather look down at the screens of smartphones. The script at the bottom of the assignment expresses the professor’s frustration that simple things like the scale of the universe is not supposed to be taught in the astronomy class. The third piece of information is a notice from the school administration stating Professor Galaxy has been suspended. The fourth piece of information are two bottles of wine and a wine glass on a table in the front of the classroom. Apparently, the professor has been drinking while creating the experiment for students.

The analysis of a drama scene rather than a crime scene. What is the drama that has been committed? Professor Galaxy of Astronomy Department at UC Berkeley has been suspended because of her unusual teaching interests as well as her drinking. However, as she notes in her writing on the blackboard, it is the policies of the UC administration that have really driven her to drinking and the empty bottles of wine we can see on the table in the classroom.

The viewer also is the student who attempts to complete the assignment from Professor Galaxy. Will the viewer take the yellow ball 61 feet from the classroom diorama to see the scale of the earth’s distance from the sun? Two scales compete at the same time in the diorama. The sun ball must be taken 61 feet in the real world if the sun is the six-and-a-half inches it is in the diorama. Yet, if the sun is six and a half inches in the scale of the diorama, then it only has to be taken about five feet away if scaled to diorama scale. So, 61 feet away in the real-world (viewer’s human scale) but only 5 feet away in the scale world of the students in the classroom of the diorama.