After completing law school in 1975, I moved to the Bay Area and worked for one of the largest corporations in the world. After a few years I realized that the big corporation was not for me and I began to think of other areas I might pursue. In Spring of 1977, I had been at the big corporation for two years and finding myself moving more into my artistic self. It seemed like I had covered this up over the years, for some reason. But I knew that it had always been inside me and that it was looking for new ways to express itself.

I became close friends with one of the greatest jazz piano players that ever came to the Bay Area. He was a Russian who studied at the famous Moscow Conservatory (or something like that). He first was exposed to American jazz through a secret midnight radio station in Moscow. His mentor on the radio were Oscar Peterson. Yet he was fluent in all the great Russian composers and pianists and would play through them like a child playing with blocks. He was playing with one of the greatest jazz drummers in the Bay Area as well as a bassist who played bass for years with one of the jazz legends. I was there a lot of evenings listening to the trio get hotter and hotter playing (an unusually long) gig at a restaurant bar a few blocks from the UC Berkeley campus.

It was at this time, the Spring of 1977, that I came across a piece of music that led me in a new direction in life.

It was the album Inner Voices by McCoy Tyner.

At the time I lived in an old home in Piedmont (the Oakland hills) that was built in 1915 and had the original gas lamps on the walls. My good friend (and former Princeton Seminary minister who Christened my son) and now worked at VP of Sales at the largest stereo retailer in the Bay Area. He had gotten me a great deal on the JBL speakers in the living room of the old place we were leasing. They were in the corners of the long part of the room, under some old lamps on the wall, next to the fireplace with green tile on it. He got me a great deal on the rest of the equipment and it was great to listen to my rediscovered interest in music and particularly jazz (growing up exposed to my dad’s large stereo and big band jazz of the 40s and 50s). 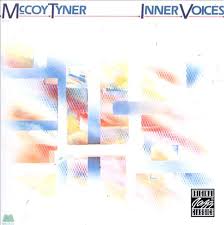 Something was stirred with the album Inner Voices that led me to seek out the music of McCoy Tyner. Luckily, Berkeley at the time was the center of cheap music albums. I was able to find almost everything by McCoy Tyner at a few used record stores and bought the albums for something like a dollar or two at the max.

I started writing a Jazz Newsletter on 11×14 paper which I had printed in different colors for one cent each at Krishna Copy near the campus in Berkeley. My mailing list was maybe a hundred or so. It was growing. I wrote about McCoy Tyner at first. Then I wrote about Horace Silver. Then, a string of other jazz musicians. I was always headed, I think, for the destination of John Coltrane’s music. The music of Tyner was that “rabbit hole” we tumble into and find ourselves somewhat out of control.

In 1980, after five years, I left the big corporation and went to work for a few months in a few different projects, hiring myself out as a type of marketing and/or sales consultant. During this time, I started writing a book on my discovery of the music of John Coltrane. The music of McCoy Tyner led directly to the music of his old employer John Coltrane. It was an amazing discovery for me.

To make this discovery more real, it seemed that it might be best to listen to the music in the order that Coltrane recorded it from the earliest to the latest. It seemed important to match the music up to dates and other music and things happening in culture at the time. The politics of the world. The context that the particular phase of Trane’s music we’re hearing. Perhaps the synchronicities involved with it all? 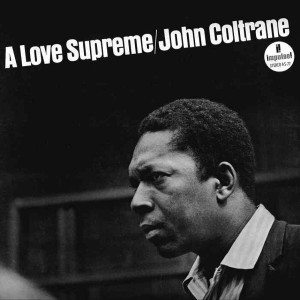 I wrote the book from the perspective of an embedded reporter, undercover, within enemy territory, or a place he/she is not supposed to go. Behind the old “curtain” in some way so you get a good glimpse of the backside of the old man Wizard standing in the booth, talking into it. His image being broadcast out five stories high to the citizens of the Emerald City.

As an embedded reporter, listening to the music of John Coltrane, for the first time, in the order he created it. And putting the music into a context of the times. Because I had not directly been exposed to the music of Coltrane in high school, I was a fairly good and unbiased observer/listener to (report on) Coltrane’s music. Importantly, not as some grand critique of Coltrane, looking back, surveying the vast sweep of his music but rather as a the creation of everything. Rather, the meager perspective of someone discovering an artist for the first time and writing a type of journal about this discovery. In some ways, the dramatic movement from a “fandom” to “discipleship.” Is this (at heart) a symbolic process?

A manuscript was created and a book called Spirit Catcher was self-published. I’m honored that it received the Best Biography Award from the Small Press Association in 1977.