View of San Francisco from Grizzly Peak in Tilden Park, Berkeley – A Photo of a Photo

There is nothing quite like Tilden Park above Berkeley in the East Bay. In a matter of minutes, one can go from Berkeley up into the wilderness of Tilden Park. I’ve been hiking in Tilden for years so it was good to get back to the park when I visited Berkeley in June of 2018. We stayed at the old Claremont Hotel which is just below Tilden Park. My son Chris came over to the hotel and drove me up to Grizzly Peak Boulevard, a road along the summit of the Berkeley Hills above Berkeley and directly behind the UC Berkeley campus. The peak was named for the California Grizzly bear which inhabited the local area until the late 1800s.

Our first stop was a scenic view spot along the road. It offers one of the best views of San Francisco from the Berkeley hills. I took some pictures using the High Dynamic Range technique and they turned out pretty well. One photo in particular was interesting as it was looking through the wild flowers at the view. 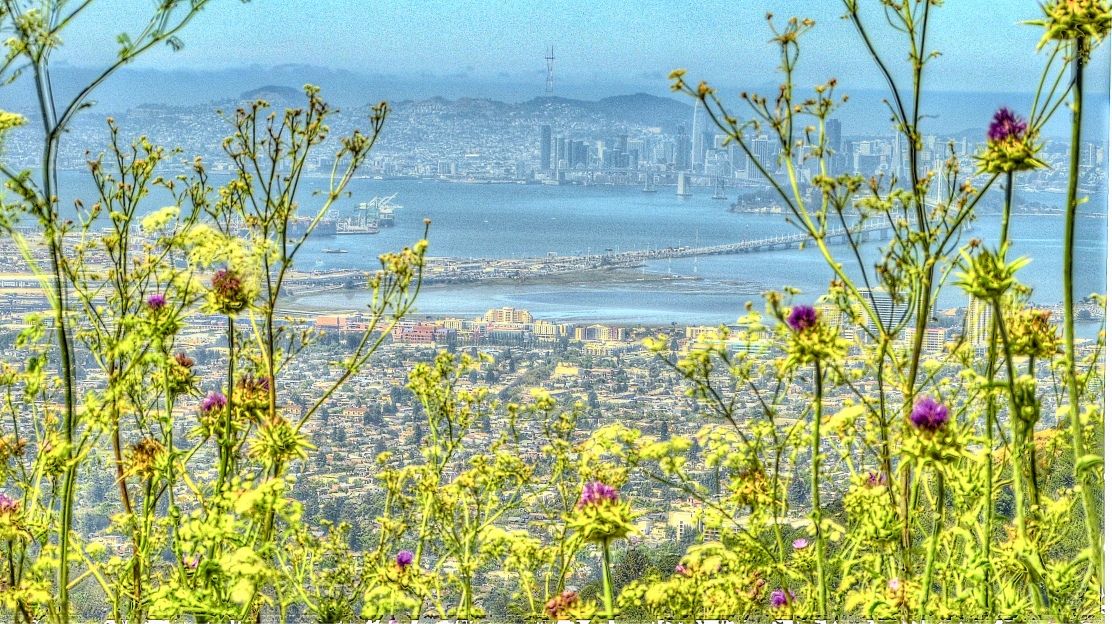 Looking Through Wildflowers at San Francisco

The photo reminded me how close the Bay Area is to wilderness. It is not surprising that the Sierra Club was founded in San Francisco. From the view looking through the wildflowers, San Francisco is only ten miles away. Yet, it seems so much farther away than this. To me, the view symbolized looking at civilization from the wilderness.

I thought of creating a diorama of the photo. Previously, I had placed digital scenes on my computer monitor in the background of scenes. But perhaps I should incorporate photos of mine for backgrounds of diorama scenes? In other words, use my photos for diorama backgrounds and take photos of these photos.

I printed out the photo on 5″ x 7″ photo paper and glued it to a 5 x 7 piece of oak and then glued another 5 x 7 piece of oak to the bottom of the piece of oak with the photo on it to form an “L” shape with the photo on the vertical part of the L. On the flat area of the oak, I made ground with clay and then spray painted it a mixture of lime green and forest green, attempting to match the colors in the photo. I attempted to continue the flowers in the photo outward into the diorama using paper flowers from Michaels craft store. I hand painted paper flowers with neon colors of pink, blue and yellow from Sharpie pens. I added vegetation from WoodLand Scenics. Finally, I added an O-scale man holding onto a flower to show the viewer that there were giant flowers not just your ordinary wildflowers.

Originally, I phototgraphed the diorama against my computer screen and shot it using two Litra lights on both sides to light it. However, the true color of sunshine was not able to be caught under the artificial light and I took it outside and shot the diorama under real sunlight.

One thought on “Tilden Park”