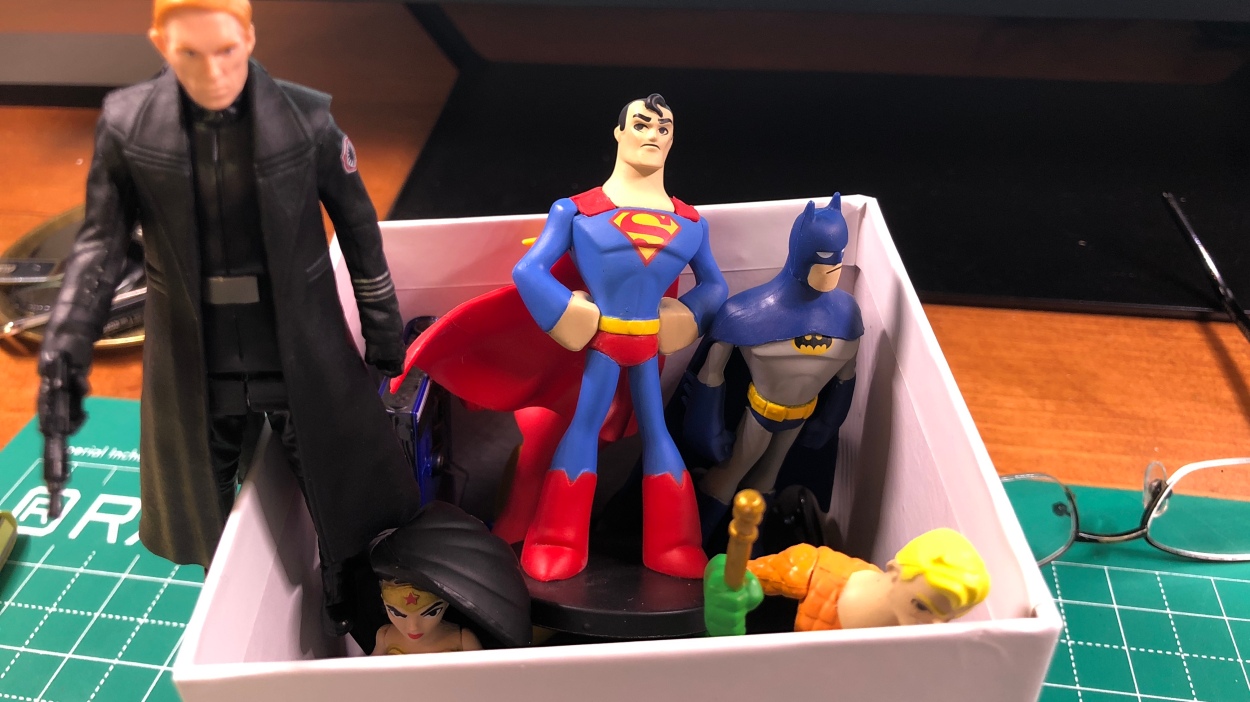 I think I bring things together more than create things. There’s a big difference. I’m different from a lot of modelers who create their own figures from wire skeletons covering them with clay and epoxy. I’ve never tried to do this. The result is that few of my dioramas have characters in them. Most are scenes without people.

Finding a story and drama in scenes not populated by actors in some form (people or animals mainly) presents a large challenge. It is the challenge of creating drama with just a landscape with structures or objects on it.

For example, in my diorama “Chasing Bullitt,” Steve McQueen’s green Mustang from the movie Bullitt jumps over the intersection of Taylor and Union in San Francisco. Or, a UFO lights up with multi-colored LED lights in the middle of the desert. Or, the Hoover FBI Building lurks on the top of a great cliff above a swamp below inhabited by prehistoric beasts.

I consider myself an assembler of icons and artifacts and collected pieces and objects rather than a builder of models. My job as a dioramist seems to involve “calling” all of these pieces together for a particular scene in a diorama. Calling them with some type of “privileged” call or instrument or sound somewhat like the Pied Piper called all of the children together. Sometimes my pieces feel they are passed up by me and protest. This post is about one of these protests.

A few months ago, in an effort to organize the quickly expanding boundaries of my little office studio, I went to Michaels and got a lot of shoe boxes on sale. I attempted to organize my diorama making objects into the various boxes I had purchased at Michaels. Trees went into one box. Cars into another. There was McQueen’s green Mustang and the villain’s black Charger at 1/63 scale in the box next to Z-scale tanks or a 50s Chevy Belair in 1/43 scale.  Roads were in another box. There were boxes for all parts of a diorama.

One box contained all the various characters or critters that might inhabit the diorama. There were dinosaurs, insects, farm animals, bears, birds of all types (including a huge Eagle bought to go onto the front of a Philadelphia Eagles bar after winning the Super Bowl) and all types of people: HO scale people were predominant (a happy family; a prison chain gang; a group of hobos with a tiny fire). But there were a number of purchased small action figures. Most were from popular franchises like Star Wars. But they were beautifully made and seemed to be ripe for plastic surgery on them if I ever got the urge to create characters for my dioramas.

The process of creating one of my dioramas is a little different from the process used by others. Many pieces for dioramas have been assembled into boxes in my office studio. I’ve searched these objects out over the last few months – in antique stores, model shops, ordering things from Amazon. Sometimes, not knowing why I would need them but simply having a feeling I would need them at some future point in time.

Model making for many others is linear, based on instructions and following these instructions in a step process. But modeling for me is so non-linear not based on pre-made instructions from the past but rather on feelings and emotions from the present. This makes all the difference in the world in the creation of art. Jazz calls for this particular state and method of creation called “improvisation.” America invented that improvised art called jazz. 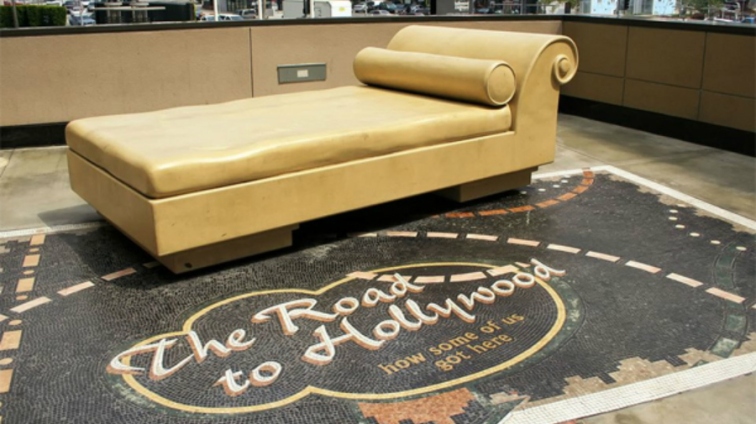 I didn’t know it at the time but now – on reflection – this has been the grand artistic experiment that I have been carrying out for the past six months. I collect objects for the boxes in my studio without ideas of what I want to do. The ideas come later and I’m still not all that sure from what direction they come.

There is a group of words in a file called Making Scenes about all of this. It is based on a journal I kept over the past few months on this journey of creating these symbolic things called dioramas.

But for now, it seems enough to simply say that the type of dioramas I have been creating have come together more through that Jungian idea called synchronicity than anything else. As he once stated, it meant for him the idea of “meaningful coincidences” or the importance of things coming together at particular points in time. Coming together by coincidence without any outward createion of causes making things come together.

Perhaps this is the real manner my dioramas and illusions are created. Not really created as much as brought together at a particular moment in time, for a particular scene in particular stories. But all assembled beforehand and waiting for their summons or call. 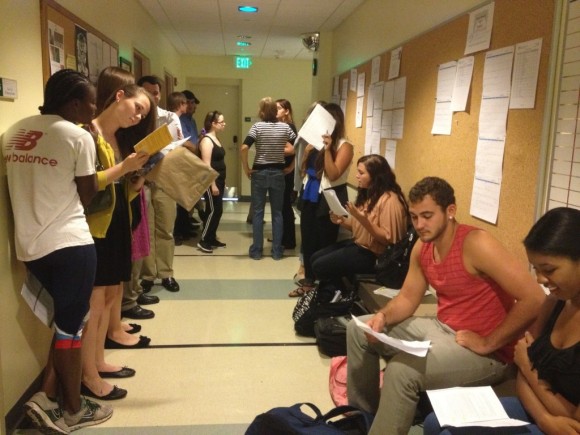 It is not a real stretch to think that the characters in the boxes wait like actors and actresses in Hollywood for their casting calls.

I can see a scene where they have left their boxes and appeared at some waiting room of a film studio (or diorama company perhaps). Perhaps they are outside the building in a type of protest, holding signs that say things like “Remember Toy Story” on them. It is obvious that the characters in my boxes have revolted and demand inclusion in one of my dioramas.

Many of the Marvel Characters are there with a number of Star Wars characters. They are mixed with the HO characters mentioned above. The hobo gang and the prison gang. But there is even an unpainted little Alice in Wonderland in the casting room. Also, there is a whole set of farm animals from SafariLand Miniatures in the room. It has the appearance of a type of waiting room for Noah’s Ark. The film or the real historical event.

It presents a difficult situation for me.

I’ve never been petitioned by objects in my art studio to be in a particular artwork.

It’s upsetting and pretty bizarre at the same time.

But perhaps there’s story and drama of a Casting Call diorama?

It seems close to the images he described in his Preface to his 1916 book The Rescue. 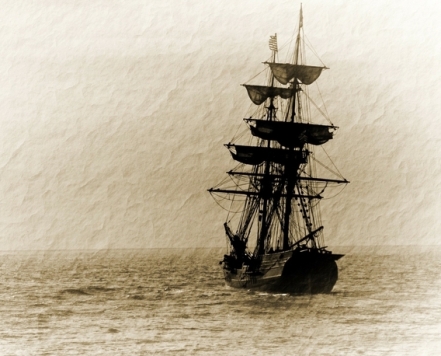 These objects that I’ve collected are much like the “crew members” on the ship he appraoches. The crew members turn out to be symbols of the novel he started but never finished two decades before. As Conrad writes in the Preface of The Rescue, they waited patiently for his return to their attention as artistic objects in the tool chest of the great artist. They always knew he would return to them. This is communicated so beautifully by Conrad in his Preface to The Rescue.

“The years passed and the pages grew in number, and the long reveries of which they were the outcome stretched wide between me and the deserted “Rescue” like the smooth hazy spaces of a dreamy sea. Yet I never actually lost sight of that dark speck in the misty distance. It had grown very small but it asserted itself with the appeal of old associations. It seemed to me that it would be a base thing for me to slip out of the world leaving it out there all alone, waiting for its fate — that would never come? Sentiment, pure sentiment as you see, prompted me in the last instance to face the pains and hazards of that return. As I moved slowly towards the abandoned body of the tale it loomed up big amongst the glittering shallows of the coast, lonely but not forbidding. There was nothing about it of a grim derelict. It had an air of expectant life. One after another I made out the familiar faces watching my approach with faint smiles of amused recognition. They had known well enough that I was bound to come back to them. But their eyes met mine seriously as was only to be expected since I, myself, felt very serious as I stood amongst them again after years of absence. At once, without wasting words, we went to work together on our renewed life; and every moment I felt more strongly that They Who had Waited bore no grudge to the man who however widely he may have wandered at times had played truant only once in his life.” 1920. J. C.

I think about this incredible psychic insight of Conrad almost a hundred years ago. The symbolism of approaching past experiences for incorporation into present works of art or statements in some form. The idea that much of our past waits for us to give it that light of our attention. The many objects and things we’ve created in this past now become illuminated with the light of the artist’s attention. The symbolism of Conrad’s comment in The Rescue has always been about a continuing challenge for artists in the modern world. Do they give their attention to the present or do they incorporate their past?

Yet, it makes all the difference in the world.