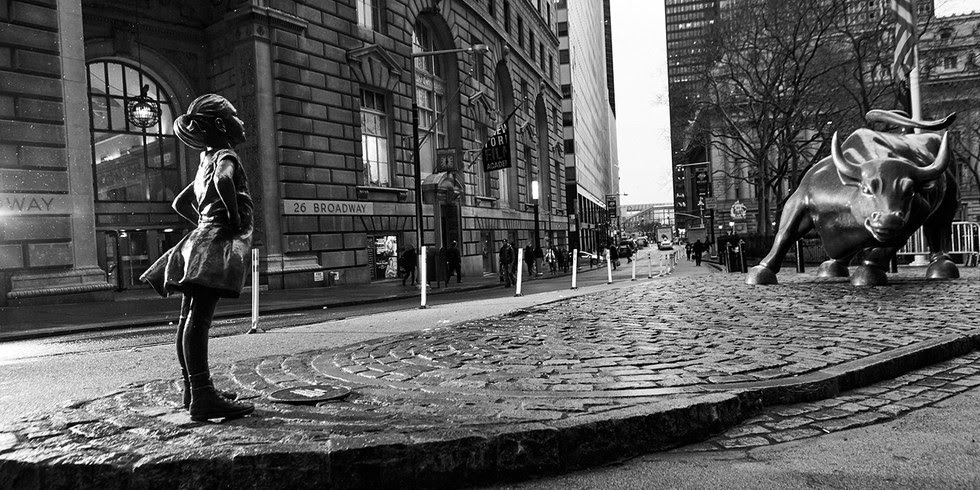 A powerful photo. It could mean a few things. We all have our ideas. Powerful in this way. The straight-and-narrow path depicted by the vertical space between the two downtown buildings. The young girl, though, does not look like she is going to take the old straight-and-narrow path. To me, this makes her so much more interesting than so many others out there. She is a child. And more, a female child. Ready to confront a bull. Not any bull but the symbol of a particular economic period called Bull Markets.

A bull market is a period during which stock market prices rise over a sustained period, therefore to the advantage of bulls. The speculator who takes a directly opposite view to the bull is the bear, who speculates on a stock decreasing in value, having sold short.

One of the most powerful symbols of male dominance in the Western culture on the right in the photo faces a young girl on the left in the photo. More than just a bull on the right but really the symbol of American economic power.

Facing a young girl on the left of the photo above.

Almost like a modern contest between two gunslingers on the streets of an old west town.

The confrontation between a young female and an powerful adult male symbol?

It seems to me, a clash of the two great Feminine and Masculine symbols expressed in a unique, new way.