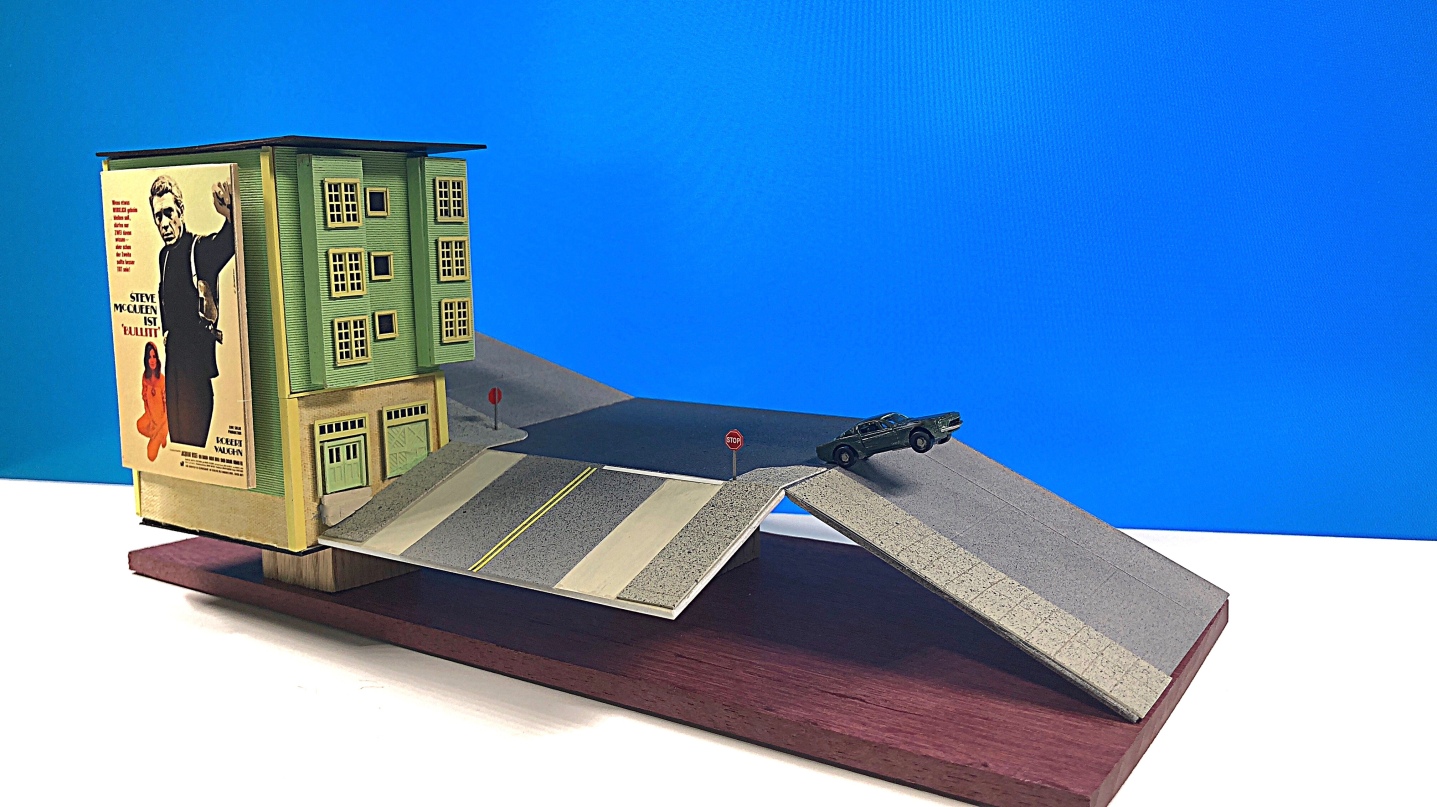 For those who have been following the progress of this diorama in our previous posts (Chasing Bullitt: Part One and Chasing Bullitt: Part Two), the windows finally arrived and I’ve been able to complete the Chasing Bullitt diorama in the last few days. Everything goes fairly well except for a few minor things that get “sanded out” and “smoothed down.”  I thought of placing a pin under McQueen’s Mustang but then realized some Dap’s Rapid Fuse on the back of the Mustang would do the trick. 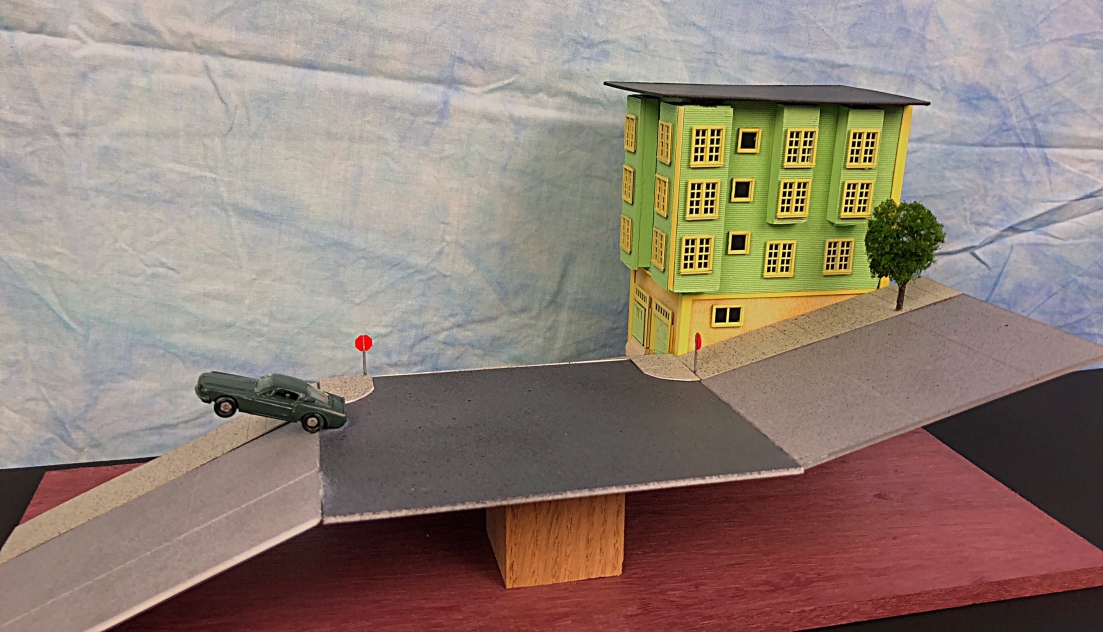 McQueen’s Mustang leaves the intersection at around 80 mph 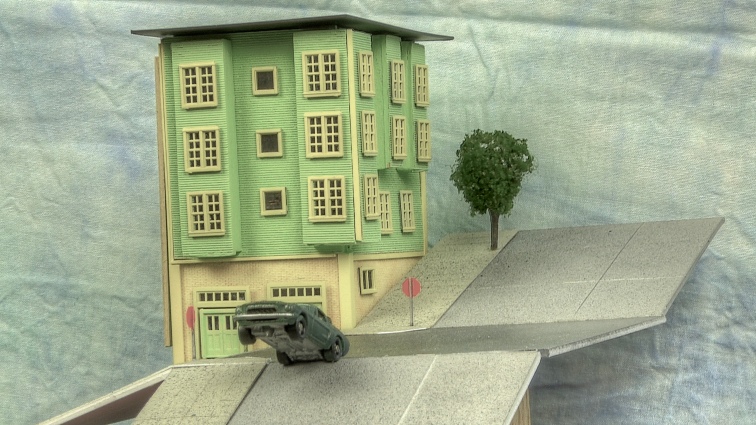 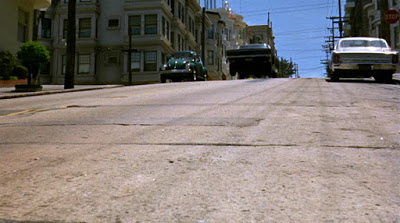 The actual scene from Bullitt (Yeah, the cars are not in my scene as I thought they’d distract from the simplicity of the drama. The modeled flat is behind the green VW)

The model is on a 12″ x 5″ piece of quarter inch Purpleheart wood that comes from the rainforests of Brazil, Guyana, and Suriname. This piece was found at the incredible Columbus WoodWerks. The flat, streets and sidewalks are supported by two pieces of 1 1/4″ square post Oak. They are made from sheets of Evergreen Styrene, lines inscribed on them with an Exacto knife and then painted gray and black. The street lines are 1/16″ and 1/32″ pinstripe tapes from Line-O-Tape. The tree is from Woodland Scenics. The stop signs, windows, doors and garage fixtures from Tichy Train Group. The Mustang is a diecast model from RC repainted in Hunter Green to match McQueen’s Mustang color in Bullitt. The sides of the flat are N-scale scored Basswood. The bricks on the bottom levels of the flat are from Jimmy Simmons’ incredible Monster Modelworks. The model uses a small cube Anker bluetooth speaker that can be placed on the Purpleheart base to play the original score from Bullitt by the great Lao Shifrin. (To hear the score, play the music on the YouTube video at the bottom of this post). The flat is painted in Pistachio Mint from DecoArt and the yellow trim and windows are painted Matte Citron from Rustoleum. 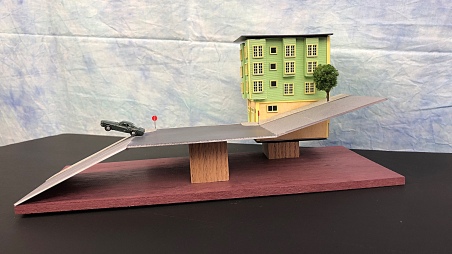 Underneath the Chasing Bullitt diorama … much more simpe than what is really beneath the streets in San Francisco!

There are various levels coming together in the diorama: Taylor Street descends to a flat Union Strett intersection and then descends again and Union Street ascends to the intersection. The cornerflat has the descending Taylor on one side of it and the ascending Union in its front. Amidst the congregation of these various levels, the Chasing Bullitt diorama attempts a design simplicity by not having sides on it and having it’s underneath structure – two square pieces of square Oak on a piece of Purpleheart wood – open and inviting to examination by the viewer.

Some fans ask me why not put the below Update with the materials above. The reason is because it wouldn’t be an Update if it could be placed in these materials.

The truth is, after the modeling club meeting in Columbus and my posts on the Chasing Bullitt diorama, I went on to other projects.

I thought I was finished with Chasing Bullitt but I was wrong. I presented it to members of my modeling club – the Columbus chapter of the IPMS or the International Plastic Modelers Society. I turned on the bluetooth speaker inside the diorama which played Lalo Schfrin’s theme from the 1968 film Bullitt, coming from my iPhone music library. It garnered a number of club members standing arouind it. There was discussion. My diorama was such a different creature sitting among the beautifully modeled tanks and cars. It might have well been a model of some alien space craft. My form of modeling was so different than what they were interested in.

The major challenge club members had with the Chasing Bullitt diorama was that it was out of the various genres they judged things from a position of Top Rated to Bottom Rated. The trouble with the diorama, it seemed to me from my observations, was that no one knew where to place my little model with the  jumping N-scale green Mustang. Really, no larger than a baby frog leaping into space. Like McQueen’s car leaping into space flying down Taylor Street at maybe 80 mph in 1968. Pursuing  super-charged Dodge Challenger. They were all modeling tanks and cars and trucks.

The black Dodge Charger arrives today as well as a black and white 1957 Chevy Bel Air station wagon from the late 50. The green Mustang (and a few other period cars to place on the street) will be sent soon the order tells me.

A few roof detailing pieces arrive today. One of those small shack-like structures on top of flfats in San Francisco and the heating and air-conditioning unit for the building. Both are usually situated on top of a glat in San Francisco so I placed them on top of the Union & Taylor flat. I put a two foot high wall on the roof as is often the situation with San Francisco flats. They come from one those little companies that make the incredible detailed parts to add to models.The parts that are never contained in kits or parts too difficult to scratch build. They are beautiful little pieces, excellently weathered to look like rusting metal on top of some flat in San Francisco. I create a two-foot grey wall around the roof of the flat and then place the roof-access shack and the air-unit on the roof and glue them into place. The flat is looking pretty good but not perfect. The steps beneath the door need to be reworked as well as the garage door of the flat. But overall, I’m pleased with the results.

Be ready for more Updates. Or new Posts.

Bullitt has not left the building. 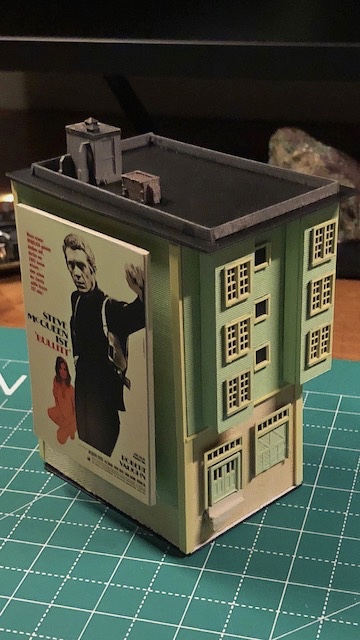 See the San Francisco part of the Bullitt chase scenes below.

The diorama scene is at 2:03 minutes into the YouTube video.

The Bullitt Soundtrack by Lalo Schifrin