I’m beginning to stop using paper, cardboard and foamcore to create my dioramas and starting to use wood. For the most part, all the latter materials are by-products of wood. But, it is good to simply go to the source and use wood for projects rather than paper and plastic. And I’m getting more and more particular in the wood I chose for my projects.

One of my favorite places to be is the Buckeye Burl wood at the WoodWerks warehouse in Columbus. Buckeye Burl is an unusual species and the colors of it range from blue-black to golden whites with many variations within that range. Most of the burl comes from the underground base of a tree and contains all types of objects making it difficult and expensive to mill. Some of the materials found in this wood are rocks, sand, dirt, bullets and even rattle snakes! I found the piece of Burl wood used in Deep State Swamp in this bin. On my visit to WoodWerks today, I found another interesting piece of Buckeye Burl and bought it along with a few pieces of Purpleheart and Walnut.

This one is a 12″ x 5″ piece of wood and has an interesting hole through it. I took it outside and washed the mud and small rocks out of the hole. I originally envisioned a small Alice-in-Wonderland figure standing above the hole watching a white rabbit run down it. But it has been impossible to find a decent Alice figure, so I gave up on this and considered other option for the new piece of wood.

I skipped watching the basketball game tonight and grabbed a glass of wine and sat staring at it. I waited for it to give me some type of casting call to the other objects and figures stored in various shoeboxes in my studio. I played around with a bunch of HO scale miners I bought a few weeks ago, but they did not work.  I placed a group of HO scale hobos on the piece of wood but they also did not work.

Then, I brought out my 1/12 scale prisoner figure in his orange prison jumpsuit. I bought him for another diorama that did not work out and he has been sitting in the shoebox with the other figures of various scales.

Wood As Context/Medium/Environment (The piece of wood as environment. Escape route hole illuminated by a Litra Light with a bue filter and diffuser)

In fact, it announces the identification of that area of life always hidden from us. That is, the environment that surrounds us 24/7. It is this environment we all “swim” within. Like fish. There is a quote I remember but can’t remember where it came from. It went something like “we’re not sure who discovered water but we’re sure it wasn’t a fish.” The quote was one of the first to speak about the medium with a “methaphoric symbol” that seemed almost up to the task called for at the time. Perhaps announcing the arrival of a new type of narrative perspective placed into the world of media criticism.

Anyway, the fact that I played with the figure in the context and content ways that McLuhan always saw the world was an example of the McLuhan influence in the two postions of the prisoner in the diorama. I had originally been “bitten” by the media bug in the mid-60s when I carried a dog-earred copy of Understanding Media around with me all through my senior year of high school.I never forgot its perperspective of looking at the world. It offered another/new worldview for me. I always saw the world with the new perspective proposed by McLuhan and then carried forward by his son, and my friend, Eric McLuhan.

Wood as Content/Message/Object within the environment (The piece of wood as object within another environment, The entire piece of wood seems an object the prisoner simply leans on. I decide that having the prisoner on the side of the wood rather than on top of it is the most interesting and ambiguous position. It seems to me the position that media critic Marshall McLuhan always saw himself. I put some glue on my prisoner’s shoes and placed him on the Purpleheart wood. He quickly bonded to it with his left, tatooed arm, resting on the piece of wood and staring at the almost eye-level hole in front of him)

I painted the fuzzy surface of the Burl wood green to look like grass and added some gray colors to represent rocks. Perhaps I’ll later add some barbed wire wrapped around his legs.

The prisoner and the piece of wood go together well. I’m happy I’ve gotten the orange giant out of the shoe box of little people and put him to work telling a story. Perhaps his real escape has not been from some real prison but from the “prison” of the shoebox?

But the ideas and philosophy of Marshall McLuhan and his son Eric McLuhan have been the continual “escape route” for seeing the world in a new perspective. Weaing a new pair of glasses, the symbol used by Proust.

Escape Route has taken the shortest time of any of our dioramas to create. But short creation time should not be used to judge the quality or value of a piece of art. In fact, a shorter creation time often leads to a closer connection with one’s artistic voice. My “escape route” has always been through the creation of art. Sometimes, it has been a relatively long escape route (like the diorama Chasing Bullitt). And sometimes, the escape route to art has been short and no more than a matter of placing an orange action figure on an old gnarly piece of Buckeye Burl wood. 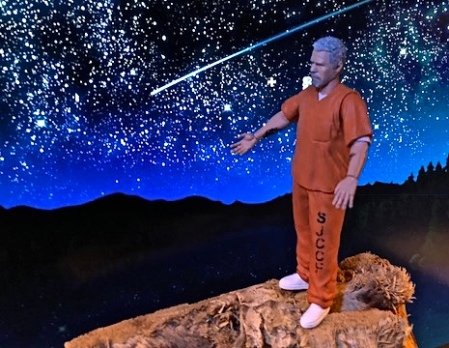 The Prisoner At Night (On top of piece of wood, the escape route hole by his feet in front of him)

I dedicate this particular post to Eric. But it means little to me dedicating particlar things to someone who has passed on. The ones who are closest to you in life are so much more than things. It seems cheap and fake to me when you dedicate some “thing” to a good friend who has passed on. Anyone who has been a true friend in life (and fellow traveller so to speak, that person who crosses all types of political and social and economic boundaries and still becomes much more than a friend in life. Rather, they become themselves mediums for this particular friendship. The two people in this relationship in effect become types of mediums for the other. Exchanges of ideas were important between Eric and me. But it was always something else that made us friends for all those years. We were both fellow travellers in life. Whatever you want to make of the “fellow traveller” image and metaphor. Sure, this particular diorama is dedicated to him. But the “thingness” of a particular blog is so meaningless to offer up as tributre to him when each site we create is in much part a tribute to him and the ideas of of his father Marshall McLuhan. Eric was more than just a friend. MOre than a congreation of thouseands of tiny messages. He is rather a total environment or medium in my life.

Or see Eric McLuhan Obituary in the The Star.

Or, remembering Eric in McLuhan Galaxy.